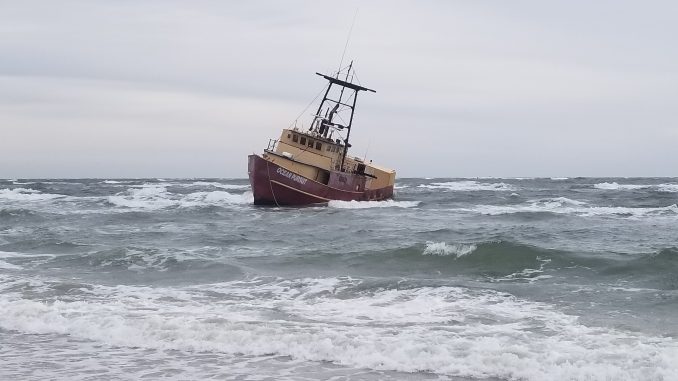 The Ocean Pursuit was hard aground in the breakers off Bodie Island Spit on March 5, 2020. [Sam Walker photo]

Collaborative efforts have begun to remove a fishing vessel that was grounded off of Oregon Inlet on the night of February 29.

The crew of the 72-foot scallop boat were safely removed by an air crew from U.S. Coast Guard Air Station Elizabeth City the following morning, and until the vessel is towed away, it still remains stranded about 50 yards near the shoreline, and roughly a half mile south of ORV Ramp 4 on Bodie Island.

Efforts to remove and salvage the vessel were initially delayed due to weather, but the U.S. Coast Guard started working with a contractor on Monday to remove all fuel and potentially hazardous material on board.

“The contractor has been hired, and (they) are on board and working on removing oily water today,” said Lt. Chris Fisher of U.S. Coast Guard Station Oregon Inlet. “Before the state can take action to remove (the vessel), our responsibility is to make sure all fuel and hazardous material is removed first.”

Per Lt. Fisher, all fuel is contained within the fuel tanks onboard the vessel, and there are no reports of oil being discharged into the Atlantic Ocean or on the neighboring beaches.

Multiple agencies are involved in removing a grounded vessel, which can include the U.S. Coast Guard, private contractors, N.C. Emergency Management, the National Park Service, and U.S. Fish and Wildlife.

“We’re all working together jointly to determine how to best remove the vessel,” said Lt. Fisher.

Once all hazardous materials have been removed, plans can begin to remove the vessel itself from the waters. A concrete timeframe for the vessel removal is unknown at this time.