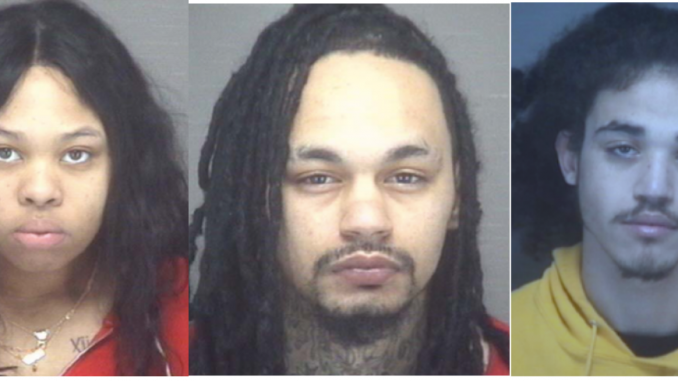 Two men and a woman were arrested Thursday night after a police pursuit from Manteo to Englehard, Dare County Sheriff Doug Doughtie said in a news release.

The incident began around 11:30 p.m. when a Dare sheriff’s deputy attempted to make a traffic stop. The driver failed to stop and a chase ensued through Manteo and Manns Harbor down Highway 264 towards Hyde County.The chase continued through Englehard and ended near 264 and Highway 94 in Swan Quarter, the sheriff said.

Two occupants in the car had outstanding criminal warrants, along with suspected cocaine and a firearm, the release said.

Arrested were:
Marcus Dayshon Bowling, 20, Roper Lane, Englehard, charged with flee to elude arrest, possession of cocaine, probation violation, possession of drug paraphernalia, failure to stop at a stop sign/red light, open container of a malt beverage, speeding, possession of a firearm by a convicted felon, possession of a stolen firearm, reckless driving to endanger and other charges. He was held on a $455,000 secured bond.

Charles Ervin Foy, 26, Roper Lan, Englehard, is charged with possession of cocaine, possession of drug paraphernalia, possess open container in passenger area, resisting a public officer, Speeding, reckless driving to endanger, failure to wear a seatbelt and other charges. He is in custody on a $21,000 secured bond.

Shytianan Misia Alford, 22, of Henley Place, Smithfield, is charged with possession of cocaine, possession of drug paraphernalia and possess open container in passenger area. Alford is in custody under a $12,500 secured bond.