What on earth is happening to the traffic on our roads? Over the past two weeks I have personally witnessed about 10 accidents on my workday commute. If you’re looking at this article while you’re stuck in traffic because of a wreck, I completely sympathize with your plight. If you’re reading this while driving – STOP! Focus on the road! There are a lot of cars and about half of them, locals and tourists alike, don’t know where they’re going. Seriously, be careful; our beer is riding around out there! 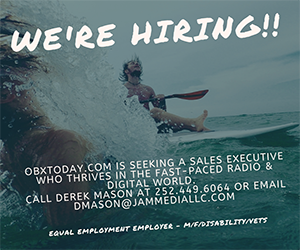 Our intrepid salesman burns up the highway to deliver our beer, and soon our sausages, to local stores and restaurants from Hatteras to Corolla. If you won’t drive carefully for your own safety then do it for the brats! Apart from the Weeping Radish delivery van, cars and sausages have another surprising connection. Did you know that VW sells more sausages per year than cars? 6.5 million sausages to 6.2 million cars according to an article in the Wall Street Journal. The Volkswagen recipe is top secret with only a handful of people in the company knowing the classified ingredients. It’s not available in America due to import regulations, so you’d have to travel to Germany to try it. This has only served to increase the mythic status of the carmakers’ hearty foodstuff among sausage enthusiasts. And what kind of sausage would this be? A currywurst. The same sausage that inspired our curry ketchup and had it’s own museum in Berlin. Like I said before the Germans really love their currywurst. It’s not just the best of the wurst, it’s king of the Berliners!

But it can get lonely at the top so we thought it was high time our curry ketchup had some company. Our chefs worked to perfect a sweet mustard based on the styles found in Bavaria and I think they’ve succeeded brilliantly. In America our store shelves are stocked with spicy mustards, Dijon mustards, chipotle mustards, and honey mustards. I could go on like Bubba in Forrest Gump about all the different variations of mustard, but our Bavarian Sweet Mustard still stands out from the crowd. It’s not too sugary but you can taste the sweetness and the heat from the mustard seed is certainly present but tempered by the onions and spices. This particular type of mustard is more common in Bavaria as it is the perfect complement to the delicate flavor of the bratwurst. Just the thing for us!

Uli loves to tease that Bavaria is the only part of Germany. Even though he’s biased on that point having grown up in that southern state, superficially most Americans would agree with him. The Oktoberfests, traditional clothing and dancing that most people associate with Germany are actually distinctly Bavarian. In America we tease the Mason-Dixon Line to reference different regional cultures while in Germany they joke about the White Sausage Equator. Different regions have their specialties in every country and on our shelves we’ve managed to bridge the North/South Divide. Well the German one at any rate! Come over to our restaurant and have some beer and brats and see on what side of the White Sausage Equator your taste buds lie!