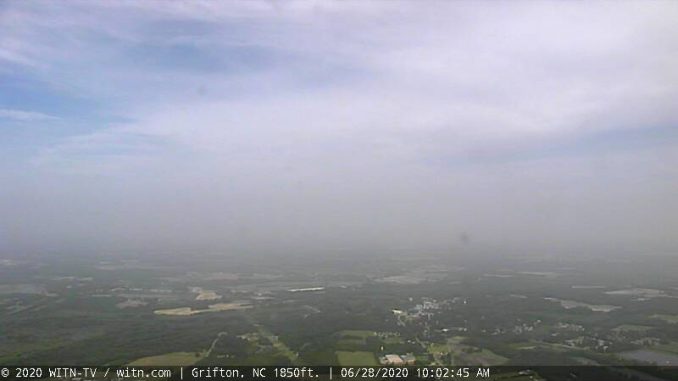 An air quality alert is in effect for eastern North Carolina today as a Saharan dust plume that traveled across the Atlantic Ocean impacts the atmosphere.

Skies will be hazy at times today and airborne dust articles can irritate the eyes and the respiratory system, as well as aggravate or exacerbate chronic heart and lung diseases, according to the National Weather Service Newport/Morehead City forecast office.

The mass of dusty air forms over the Sahara Desert every year and moves westward across the tropical North Atlantic. The dust plume, which extends about 5,000 to 20,000 feet into the atmosphere, can be transported several thousand miles, reaching as far as the Caribbean, Florida, and the U.S. Gulf Coast when winds are particularly strong, according to the National Oceanic and Atmospheric Administration.

But this year’s a bit different, even “extraordinarily rare,” says the Washington Post’s Capital Weather Gang.

“This event stands out in terms of the dust layer’s thickness, its low altitude and geographic reach, causing a dramatic deterioration in air quality in Puerto Rico, Barbados, Guadeloupe and numerous other locations where records are maintained,” the weather gang reported. “It is simultaneously reducing the amount of solar radiation reaching the Earth’s surface.”

The dry, dusty air associated with the Saharan dust plume has been known to cause hazy skies over the areas where it blows, as well as toxic algal blooms. It also can help suppress hurricane and tropical storm development in the Atlantic Basin due to its dense, dry air and increased wind shear,” according to NOAA.