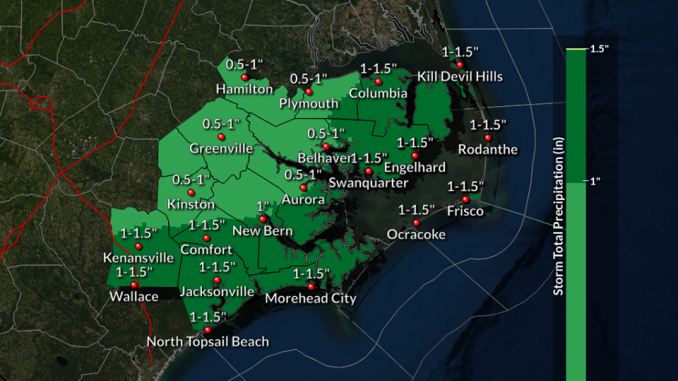 After near-record warmth over eastern North Carolina and the Outer Banks to wrap up March, a fast moving coastal storm is forecast to bring heavy rainfall and rough surf the middle of this week.

An area of low pressure will move eastward to the south of the area Tuesday night and strengthen well offshore
Wednesday, according to forecasters at the National Weather Service office in Newport/Morehead City.

With the strong onshore flow, minor water level rises will be possible for areas adjacent to the southern Pamlico Sound and oceanside locations north of Cape Hatteras.

Rough surf will develop along with the threat for overwash and minor erosion from Buxton north.

Offshore seas of 8 to 14 feet north of Ocracoke are expected on Wednesday, then slowly subsiding Wednesday night and Thursday.

Once the storm clears, dry weather returns with cooler temperatures headed into the first weekend of April.