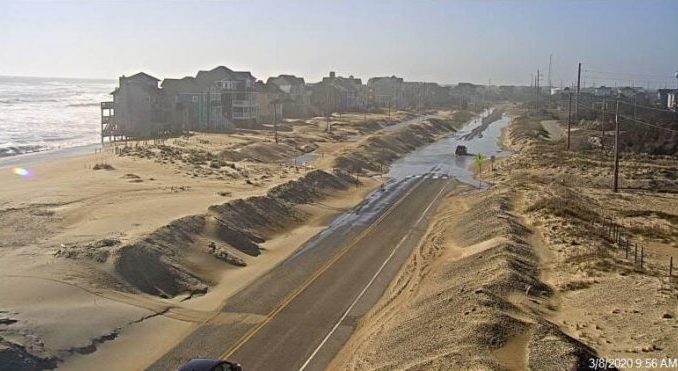 Minor ocean overwash was reported in north Rodanthe and north Buxton on Sunday morning, which coincided with the morning’s high tide at approximately 6:30 a.m.

N.C. 12 is reportedly still passable throughout Hatteras Island, and the flooding had subsided as of 10:00 a.m., however, some standing water still remains on the roadway.

Travelers are advised to drive slowly and proceed with caution, as saltwater can damage vehicles. High seas and heavy surf may continue through Sunday, and another cycle of overwash is possible, particularly with the next high tide at roughly 7 p.m.

According to the National Weather Service Newport/Morehead City office’s marine forecast, the latest buoy observations are showing northerly winds generally 5-15 knots, except over the central waters where winds are around 20 knots. Seas are 10-to-11 ft. north of Cape Hatteras and 6-to-10 south. The moderate northerly winds will become light and variable by Sunday afternoon as broad surface high pressure moves over the coast.