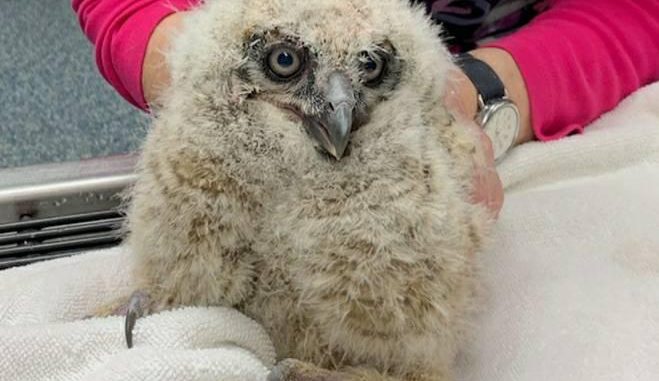 Hatteras Island Wildlife Rehabilitation would like to get this baby great horned owl back with his family. [Photo courtesy HIWR]

A local wildlife rehabilitator is looking for information about a baby great horned owl dropped off Thursday morning at the Roanoke Island Animal Clinic in Manteo.

The fluffy owl may have been found in Nags Head, said Lou Browning of Hatteras Island Wildlife Rehabilitation.

It’s the time of year great horned owls are raising their families in osprey nests around the Outer Banks. The babies can be easily blown from nests during high winds, or spooked by people getting too close.

“The best move at this point is to re-nest this baby so its natural parents can raise it,” Browning said in a Facebook post. But first, he needs to find the nest.

If anyone has specifics on where the owl came from, let Browning know via Facebook or call
252-475-4217.