As preparations continued on the Outer Banks ahead of the storm’s likely arrival late Thursday, Hurricane Dorian gained some strength back while moving parallel to the coast of Florida and Georgia.

Hurricane and storm surge warnings remain in effect for the Outer Banks, mainland Dare, Hyde and Currituck counties, the Pamlico and Albemarle sounds and Pamlico River. 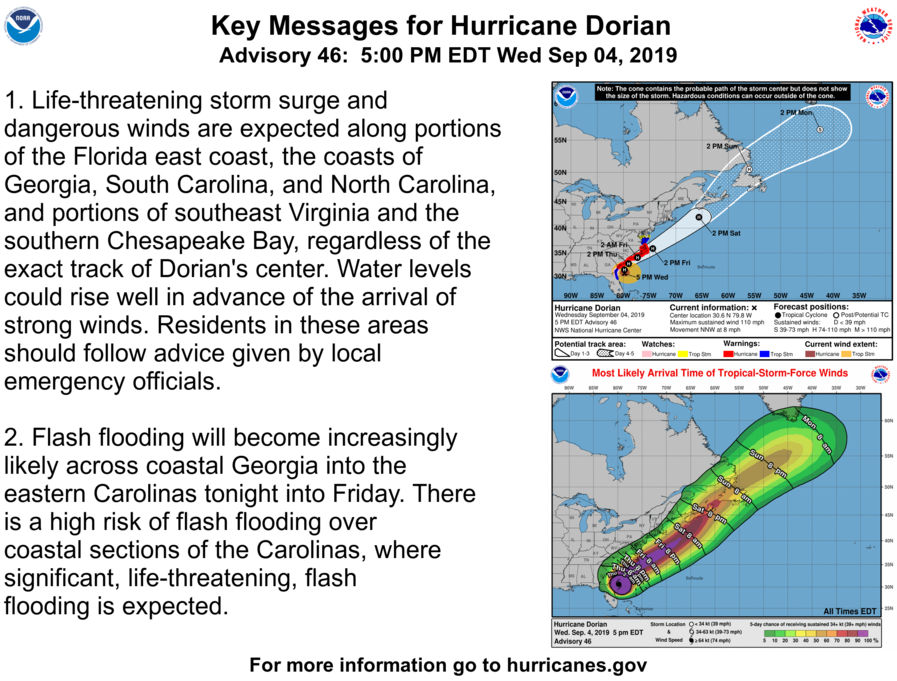 On Wednesday at 5 p.m., Dorian had maximum sustained winds of 110 mph with higher gusts. Some fluctuations in strength are possible tonight, followed by slow weakening Thursday through Friday.

The center of the hurricane was about 400 miles south-southwest of Cape Hatteras, with hurricane force winds extended 70 miles from the center and tropical storm force winds covering 195 miles.

The worst storm surge flooding is currently forecast for the southern end of the Pamlico Sound, western end of Albemarle Sound, and the adjoining river headwaters, of 4 to 6 feet.

David Glenn, a forecaster at NWS Newport, pointed out that while there is still a threat of major soundside inundation, Dorian will be moving at a much faster forward speed than previous benchmark storms like Irene in 2011 and Florence last year.

There is also the potential for oceanside storm surge flooding of 4 to 6 feet. Water levels on the sounds and ocean side could begin to rise well in advance of the arrival of strong winds. The surge will be accompanied by large and destructive waves.

Rainfall could total between 6 and 12 inches, with isolated spots receiving as much as 15 inches from Dorian.

Currituck County essential personnel will work in the county’s Emergency Operations Center beginning on Thursday, Sept. 5. All emergency services, including the Sheriff’s Office, Emergency Medical Services, and fire stations, have increased staffing ahead of Dorian’s arrival. Additional assets, including high-water vehicles, have been stationed at locations throughout the county.

All recycling centers will close at 12 pm on Thursday, Sept. 5 and be closed on Friday, Sept. 6. Recycling Centers will reopen on Saturday, Sept. 7 on a normal schedule, weather and site conditions permitting.